Adept Economics Director Gene Tunny has been quoted in an In Queensland article: How Australia is sleepwalking into a trade disaster with China. Certainly, the increasing frequency and magnitude of Chinese trade restrictions on Australian products should be very concerning to both Australian citizens and businesses. Wine was recently added to a growing list of Australian exports – including barley, beef, and coal – that have been either officially or unofficially suspended this year as trade tensions between Australia and its largest export partner rise.

How much do Australian exporters rely on China?

Figure 1: Top 10 exporting destinations of goods and services exports ($m) as of 2019

Australia’s reliance on Chinese exports has grown steadily throughout the 21st century with exports of goods and services to China growing at an average annualised rate of 17% from 2000 to 2019. Trade to China now accounts for 34% of Australia’s total exports (Figure 2). On the goods side, Australia exports mostly commodities, and on the services side, our largest exports are tourism and education. These different categories are discussed further below.

The Australian-Chinese trading relationship is largely centred around iron ore and coal. In 2018-19, iron ores & concentrates exports to China made up 17% of Australia’s total commodities exports around the world, while confidential items of trade (consisting predominantly of natural gas) and coal contributed 9.4% (see Figure 3). Other sectors, like beef, animal products, wine and horticulture have also flourished in the Chinese market.

The scale of commodities trade with China varies throughout Australian states and territories (see Figure 4).

Figure 4: Chinese merchandise export dependence by states and territories ($b), 2018-19

Western Australia is the most reliant on Chinese exports out of all states and territories, with 50% of the state’s total exports in 2018-19 making their way to China. In addition to trade partner reliance, Western Australia appears to be resource dependent with 80% of its exports to China being iron ores & concentrates.

Queensland’s percentage of total commodity exports going to China is slightly below the national average, with 33% of the state’s commodities exports going to China in 2018-19, but this is largely owing to the fact that the state also sells considerable amounts of coal to Japan and Korea. More than half of Queensland’s exports to China were in the form of confidential items of trade, while coal exports reached just shy of $10 billion. New South Wales, too, sent over $2 billion in coal to China in 2018-19.

Iron ore and coal make up 27% of Australia’s exports to China – nearly all of which is produced by WA, QLD, and NSW – and therefore represent a substantial vulnerability to both state and national economies if Chinese trade restrictions are imposed.

The international education industry was worth $40.3 billion to the Australian economy in 2019. Chinese students, who contributed $12.7 billion last year, have consistently been the most valuable customers of Australia’s education system for over a decade (Figure 5). 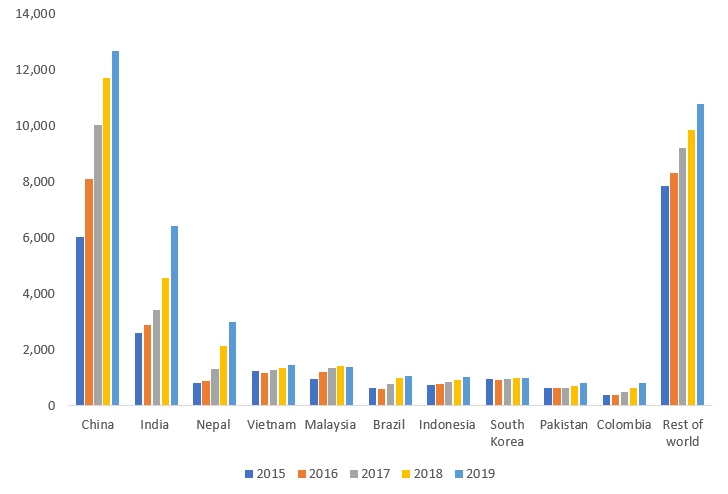 Education institutions in Victoria and New South Wales took in 154,788, or 72%, of Chinese students in 2019 and are thus more vulnerable to fluctuations in Chinese student enrolments than  other states and territories (see Figure 6).

Tourism accounted for 8.2% of Australian exports in 2018-19 and employed over 666,000 people, according to the National Tourism Satellite Account. Chinese tourists have been Australia’s most valuable visitors in recent years, spending $11.9 billion in 2018-19 and $8.4 billion in 2019-20 (Figure 7). In both years, Chinese tourists have accounted for more than 25% of international spending.

Chinese travellers are especially drawn to New South Wales, Victoria, and Queensland with the three states accounting for 82% of Chinese visitations to Australia in 2018-19 (see Figure 8). 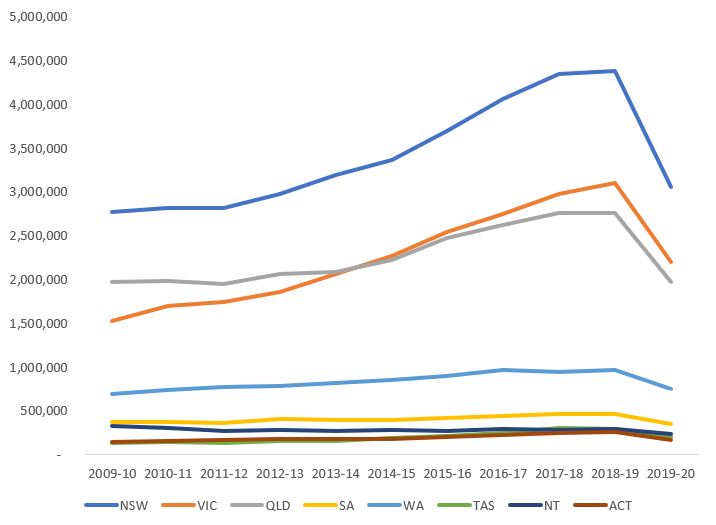 Expenditure from Chinese tourists was 30% lower in 2019-20 than in 2018-19, which can be largely attributed to the travel restrictions imposed by the Australian Government in response to COVID-19. For the same reason, Chinese student numbers fell by 13% between December 2019 and August 2020 (see Figure 6).

In addition to domestically enforced travel restrictions, however, the Chinese Government has demonstrated its readiness to restrict Chinese visitation to Australia by encouraging its citizens not to travel to the “racist” country following calls from the Morrison Government for an independent inquiry into the COVID-19 outbreak. Therefore, Australia’s tourism and education sectors may not be overlooked by future Chinese trade retaliations.

Exports to China make a large contribution to GDP at the national level, with the resources, agricultural, education, and tourism sectors particularly susceptible to further trade retaliations.

Former Prime Minister Kevin Rudd has publicly encouraged Australian industries to consider diversifying their international economic engagement, but this idea has been met with notable objections. For instance, the Australia-China Relations Institute referred to the notion that Australia is “too dependent” on China as a “Zombie economic idea… that should have been slain by an accumulation of facts and evidence but continue to walk the land, stalking public policy”.

In a similar vein, former Australian Ambassador to the People’s Republic of China Geoff Raby described the prospect of redirecting trade routes away from China as “nothing other than wishful thinking” due to the “asymmetrical relationship [whereby] we need China more than they need us”.

In light of the recent trade skirmishes, however, Australian industries appear to be acting on their own accord to seek out ways to reduce dependence on Chinese exports. For example, Cotton Australia CEO Adam Kay, whose industry sends 60% of its product to China, says suppliers will have to work hard over the next six months to divert their high-quality product to other Asian markets.

Moreover, when China suspended Australian beef imports in May this year, Meat and Livestock Australia noted that the “large spread and diversification of export markets continues to be a strength of Australia’s red meat industry” with export values remaining buoyant throughout the restricted period.

Other industries, however, appear to be more confident in the mutual dependency of the Australian-Chinese trading relationship. In a submission to an inquiry into Diversifying Australia’s Trade and Investment Profile, Wool Producers Australia rejected the view that the Australian wool industry is over-reliant on China because:

The relationship between the two countries’ wool industries is symbiotic; while we need China to continue to purchase our wool, China needs Australia as we are the largest exporting nation of wool by volume, and because of the high quality and other specifications of our wool that cannot be achieved in wool grown by other markets.

Similar remarks have been made about China’s heavy reliance on iron ore for its steel industry. Australia is an ideal trading partner to support Chinese steel mills not only because of existing iron ore production capabilities and geographical closeness, but also due to the fact that Brazil, the world’s second largest iron ore producer, is failing to control the coronavirus pandemic and deteriorating economically. Arguably, the same cannot be said about Australian thermal coal, which, according to Alex Turnbull, China is losing interest in due to growing domestic production capabilities.

In conclusion, it does look like Australia’s economy is heavily dependent on China as a market for our exports, but it is unlikely China will halt trade with all Australian industries due to the high quality and reliable supply of Australian exports that Chinese businesses and consumers recognise. That being said, China’s potentially wavering demand for Australian coal and willingness to forego Australian agricultural products could leave a substantial hole in the national economy – particularly in the commodity export-heavy states of WA and Queensland, and the tourism and education front-runners New South Wales, Victoria and Queensland.

This article was prepared by Ben Scott, Research Officer and Gene Tunny, Director at Adept Economics. Please get in touch with Ben (ben.scott@adepteconomics.com.au) with any questions.