Australia is greatly affected by shifts in the global resources and energy market. In 2018, the sector constituted 8.8% of GDP and 73% of total goods exported. Such dependence could contribute to economic instability, however, as various macroeconomic factors coalesce to disrupt Australia’s commodity exports industry. What will these market fluctuations mean for Queensland and its mining-dependent towns? This article will look into what major Queensland mining cities and towns can expect based on the economic outlook described in the most recent Resources and Energy Quarterly report from the Chief Economist of the Australian Department of Innovation, Industry and Science. Also, future mining projects will be discussed in relation to their potential effects on nearby towns.

The Resources and Energy Quarterly shines an optimistic light on short-term commodity export earnings, which are now expected to peak at $278 billion in 2019-20, $12.9 billion higher than previously forecast. The prices of Australia’s major resource commodities, iron ore and coking (or metallurgical) coal, have surpassed seven-year highs, and the persistent weakness in the AUD/USD exchange rate has boosted recent export earnings. However, the Chief Economist outlines many reasons for this optimism to be short-lived. Australia’s resource and energy sector, he reports, can expect to suffer from:

Coal is Queensland’s largest output in the resources sector, with a large portion of the State’s coal coming out of the Mackay and Central Queensland regions. Within the Mackay region, substantial coal mining activity takes place around the Bowen Basin, which includes towns like Blackwater, Moranbah, Dysart and Emerald. Investment in mining projects around the Bowen Basin has increased over the past two years, with Qcoal’s Byerwen Mine greenfield ($1.76 billion in CAPEX), Bounty Mining’s Cook Colliery restart, Baralaba Coal Company’s Baralaba North restart and Stanmore Coal’s Isaac Plains East restart. Furthermore, according to Anthony Lynham, Queensland’s Minister for Natural Resources, in November 2018 there were:

“13 committed resources projects in Queensland with a combined capital value of more than $9.4 billion across multiple commodities.”

Of these, Fitzroy Resources’ Ironbark No. 1 greenfield project (CAPEX unknown) and Pembroke Resources’ Olive Downs South ($1 billion in CAPEX) are two of the largest projects, and they are both situated around the Bowen Basin.

There is also the prospect of the opening up of the Galilee Basin. With nine coal mine proposals looking to make use of Galilee’s 600 megatonnes per annum (mtpa) potential, such as Adani’s Carmichael Mine ($2 billion in CAPEX), smaller towns like Blackall, Muttaburra, Alpha, Aramac and Jericho could expect an economic boost in the years to come. Also, in the Surat Basin, towns like Roma, Chinchilla, Dalby and Miles are likely to experience positive economic impacts due to various resource and infrastructure projects such as the Wandoan Coal Mine ($7 billion) and the Surat Basin Rail ($1 billion). 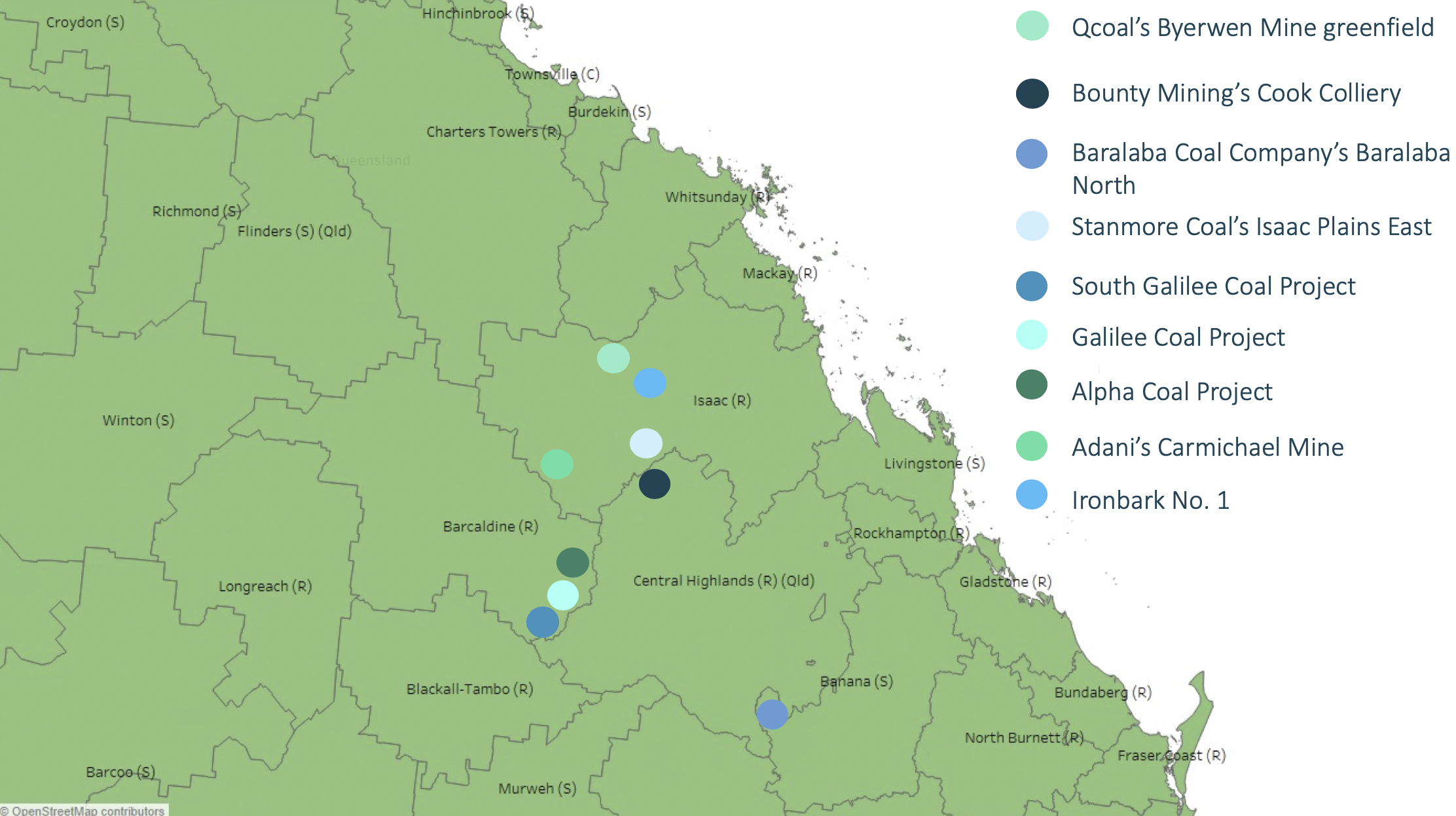 The two major types of coal are metallurgical coal, which is used in steel production, and thermal coal, which is used for power generation. Queensland dominates the Australian metallurgical coal industry, but, according to the Chief Economist’s report, the value of metallurgical coal exports could fall significantly in the near future. Despite export production and volume increases of around 5% over the next two years, the real value of exports is projected to drop 8.3% in 2019-20, and a further 12.3% in 2020-21. Growing export volumes, partly resulting from the aforementioned projects, are forecast to partially offset lower prices. This can be expected due to a decreasing global demand as the global economic outlook worsens and industrial production slows.

Importantly, the Chief Economist’s report was released before US President Trump’s US$110 billion of tariffs on Chinese goods were implemented in July, with the threat of a further US$300 billion in tariffs on September 1. Since then, the Yuan has depreciated to above 7 Yuan per US dollar. The economic impacts of the trade war and the Yuan’s depreciation are expected to exert downward pressure on China’s steel production and demand for metallurgical coal. Queensland mining towns should feel anxious about such pressures. These recent developments suggest we should possibly be much less optimistic in the short-term than the Chief Economist was when he released his report in June of this year.

The Quarterly Report forecasts metallurgical coal prices to drop to $153US/tonne in real terms by 2021, which is similar to recent Queensland Treasury predictions. However, nearby towns can expect continuing employment opportunities as prices should not fall so far as to warrant production cutbacks due to operations becoming uneconomic. Problems for mining towns typically arise when production falls and jobs are lost, but they have historically not been so responsive to moderate price fluctuations. Interestingly, Mackay’s property market has reversed a five-year slump of -26.9% with 5.6% and 9.6% growth over 12-month and three-year time frames, respectively. Persisting mining operations are crucial for the Mackay-Isaac-Whitsunday regions, which according to the QRC’s Economic Contribution Data employ 58% of the local population. This upward trend in the property market can be expected to continue over the short-term, due to strong export growth, but over the long run will be largely dependent on whether or not prices remain resilient enough to support existing and future mining operations.

Queensland currently produces and exports much less thermal coal than it does metallurgical (see chart below), with larger thermal coal production in Victoria, New South Wales and Western Australia. The Chief Economist’s report does not mention Adani’s Carmichael Mine project, which is estimated to begin producing 10 mtpa at the start of operations, before potentially ramping up to its legal capacity of 60 mtpa in the long-term. Once started, the Carmichael mine can be expected to increase Queensland’s production and exports of thermal coal, with potential for the new rail line to facilitate further mining developments in the Galilee Basin. 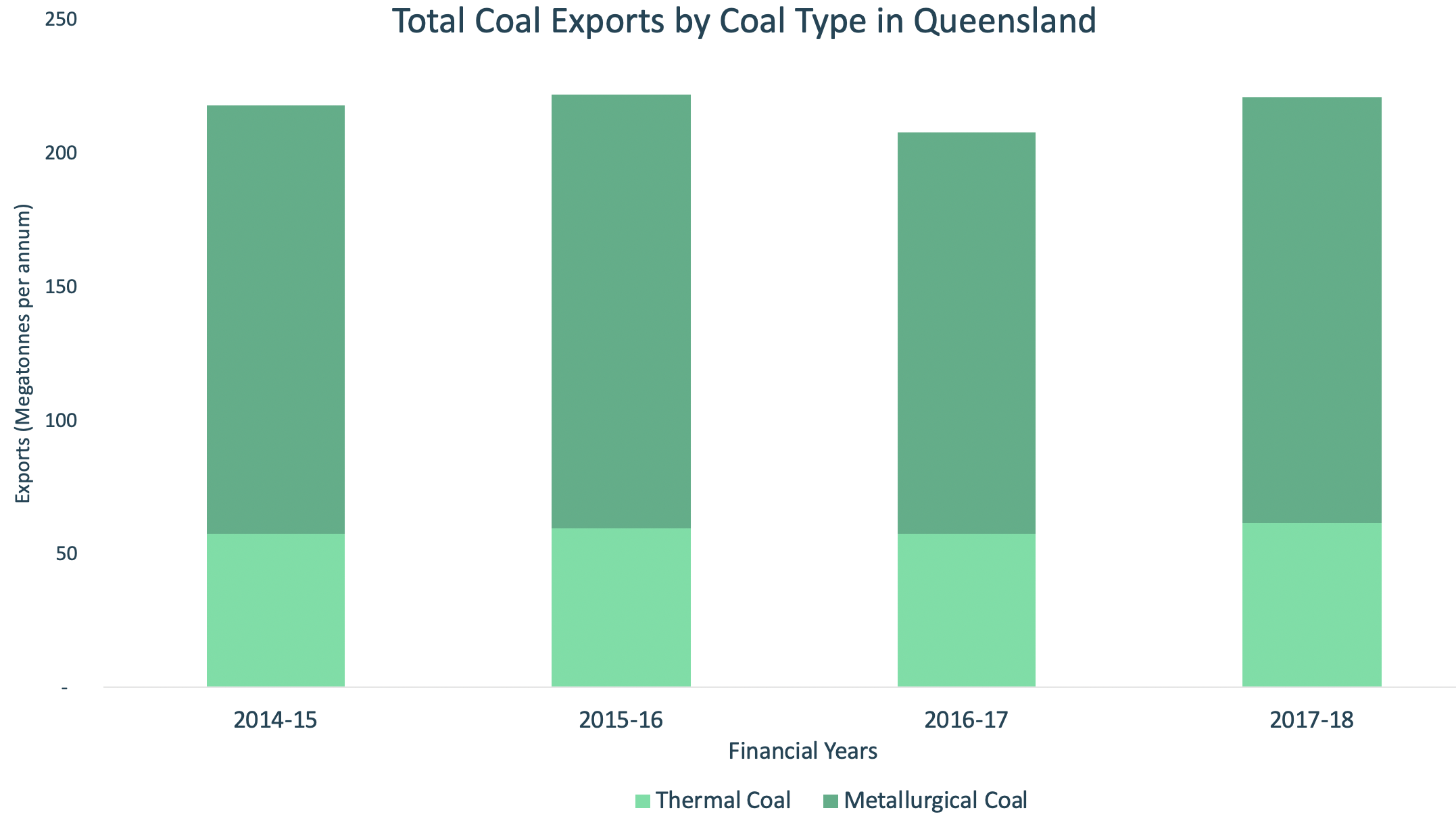 Generally, the outlook for thermal coal is concerning. The Chief Economist’s report predicts a record high of $26 billion in 2018-19 before steep declines of 19.3% and 14.6% in the real value of exports in 2019-20 and 2020-21, respectively. The Chief Economist explains this fall to be largely due to:

Contrary flows can be seen in Australia’s increased exports of thermal coal to South Korea, Taiwan, Vietnam and other economies, which have allowed Australia’s thermal coal industry to remain relatively resilient.

Similar to Mackay, the Central Queensland economy is highly dependent on mining operations, which are responsible for an estimated 37% of total employment in the region. Due to several current and prospective resources projects in the Bowen basin, this number may rise in the near future, and nearby towns can be expected to grow.

Finally, the outlook for Mount Isa, one of the largest mining towns in Australia, will be discussed. Mount Isa is responsible for much of Queensland’s zinc, lead, and copper output. In 2016, Mount Isa accounted for above 98% of total zinc production and 100% of Queensland’s lead production. Also, Mount Isa is the second-largest producer of copper in Australia. Unsurprisingly, Mount Isa’s local employment is very dependent on the resources and energy sector, which accounts for 84% of the city’s total employment in 2017-18.

Despite drops in the real export value of zinc, Mount Isa can expect a continuing level of employment and economic stability due to the persistent output growth across all of these major resources. Given Mount Isa’s already substantial mining population, if mining production remains stable, as is forecast, the Mount Isa property market should not dip. Furthermore, if global economic conditions turn out to be favourable, the property market may even show signs of recovery from its current slump.

In summary, the Chief Economist reports an optimistic outlook for Australia’s resources and energy sector in the short-term. Despite acknowledging many major  risks to the global economy, the Chief Economist’s forecast could even be considered as overly optimistic, given the deterioration in the global economic outlook which has taken place subsequent to the Report’s publication. In recent weeks, we have seen the US Federal Reserve cut interest rates,  continued escalation of the US-China trade war, and a slump in the share market. As outlined in this article, the local employment and property prices for major mining towns within Queensland are heavily dependent on the performance of the resources and energy sector. Even with growing productivity in existing mines and investment into new projects, the overall economic outlook for many local towns and cities will ultimately be determined by the strength of global demand for natural resources. The Chief Economist’s forthcoming September Quarterly Report could be an interesting moment of reflection for Australia, as these factors could present a much more uncomfortable outlook for our economy’s future.

This article was prepared by Ben Scott, Research Assistant, and Gene Tunny, Director, of Adept Economics. Please get in touch with any questions or comments to ben.scott@adepteconomics.com.au.